The mighty Predator Orion 7000 also features up to NVIDIA GeForce RTX 3090 Series GPUs and up to 64GB of DDR5-4000 RAM for enhanced visuals and performance. The EMI-compliant chassis has a transparent tempered glass side panel. It showcases the multicolored ambiance of its two 140mm (5.5in) Predator FrostBlade 2.0 fans on the front and a third 120mm (4.7in) Predator FrostBlade 2.0 fan on the back that illuminates eight ARGB-infused LEDs. Gamers also get additional flexibility to adjust ARGB lighting, fan speed, and overclocking with the integrated PredatorSense software. In addition to its striking aesthetics, the Predator Orion 7000 features advanced airflow and thermal management to effectively cool system components with the addition of an AIO liquid CPU cooler to complement the three Predator FrostBlade 2.0 fans. 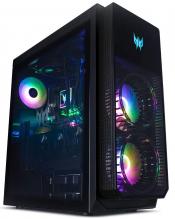 Save now 26% on the GMMK 2 at Overclockers