Chinese football fans have streamed a censored feed of the FIFA World Cup in Qatar as politicians desperately try to prevent images of large, unmasked crowds from reaching locals as protests rage against the harsh Covid measures.

FIFA has tightly controlled the vision of the World Cup and every country gets the same fodder – except China.

A comparison of footage from the Cup shows that broadcaster China Central Television (CCTV) intercepted footage of the tournament and manipulated crowd photos by using a 30-second delay.

Vision showing fans without a mask has been removed as while most of the world has dropped pandemic lockdown measures, China continues to face severe restrictions under its Covid Zero policy.

Some regions of the People’s Republic of China are still under lockdown, Chinese residents have been forced to take Covid tests every day and large street protests have erupted with protesters calling on politicians to resign.

Protests have intensified since a deadly fire at a Urumqi unit complex in western Xinjiang region killed 10 people two days ago. The building was on lockdown despite being classified as low risk for Covid.

Covid Zero, Chinese President Xi Jinping’s strict policy, has been widely criticized with record numbers of cases across the country as the virus rises.

Civil disobedience has increased across the country, including passive protests and outright opposition to the Communist Party, Jinping and controversial policies.

Here’s Canada’s goal from the same game. The international feed everyone gets shows fans up close. CCTV cuts those shots with feeds from coaches or wide shots. Watched 2 games – very clear. It’s imperfect, though — a cheering fan blasted through on the replay: pic.twitter.com/yo7oVUJ2nU

So I thought it was BS that China’s government channel was censoring photos of fans at the World Cup because of the anger at home. But it’s true,” he posted on Twitter.

‘Here are live feeds from SBS & CCTV (with a 32 second delay). As @DreyerChina explained, CCTV avoids close-ups of crowds: 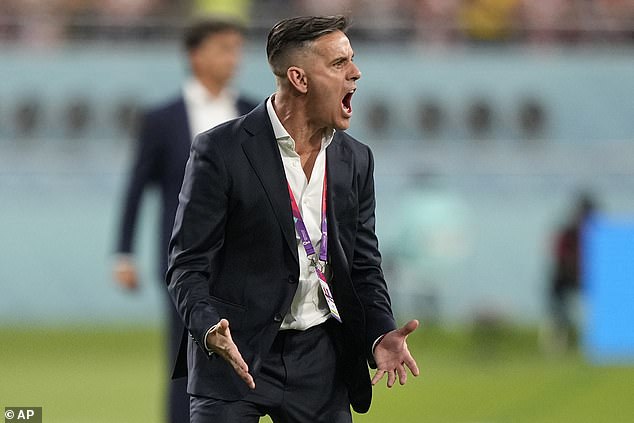 Instead of crowds, the CCTV view focuses on tight sideline shots and today showed footage of Canadian coach John Herdman as the rest of the world fans celebrated

Here’s the Canadian goal from the same game. The international feed everyone gets shows fans up close. CCTV cuts those shots with feeds from coaches or wide shots. Watched 2 games – very clear. It’s imperfect, though — a cheering fan blasted through on the replay:

“So the usual suspects will argue that China’s government TV cameras don’t censor close-ups of crowds because a few shots come through…or they choose to use different shots…but it’s very clear. Although a buddy in Beijing told me he hadn’t noticed anything unusual,” he concluded with a laughing emoji.”

Some people still refuse to see this, so they decided to follow it. Within a minute there was this: close-ups of Canadian and Croatian fans on BBC/international feed, replaced by a solo shot of Canadian coach John Herdman on CCTV. pic.twitter.com/V3DZRjHrzk

“Some people still refuse to see this, so they decided to follow it. Within a minute there was this: close-ups of Canadian and Croatian fans on BBC/international feed, replaced by a solo shot of Canadian coach John Herdman on CCTV,” he posted.

The censorship comes at the same time a BBC journalist covering an anti-lockdown protest in China was arrested amid wild protests against Xi Jinping’s dictatorship and Covid lockdowns in seven Chinese cities, including Shanghai, Nanjing and guangzhou.

The BBC’s Edward Lawrence is a cameraman for the Corporation’s China bureau, and he was filmed being dragged away by Xi’s officers screaming in desperation, “Call the consulate now!” for a friend.

Hours before his arrest, Lawrence had tweeted, “I’m at the scene of last night’s extraordinary anti-Covid zero protest in Shanghai. Many people stand here quietly watching. Lots of police. Two girls laid flowers which were promptly removed by the police. A man drove past with a middle finger to the police. #shanghai’. 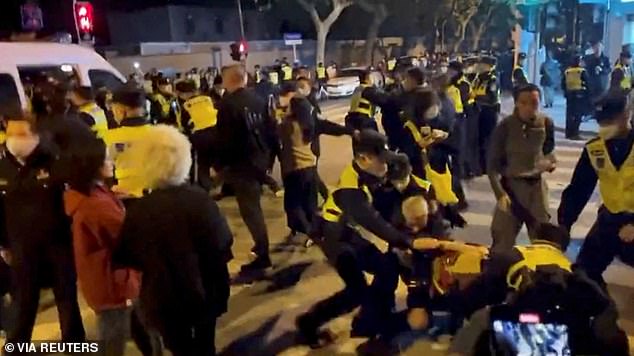 One of my good friends is leaving China after 7 years. He’s had enough of lockdowns and zero-covid. He was due to leave early next week. That was until his building went on lockdown for 7 days from this morning due to a “close connection”. A true zero-covid exit…

He was held for several hours before being released and a BBC spokesman said he was concerned about his treatment.

“The BBC is deeply concerned about the treatment of our journalist Ed Lawrence, who was arrested and handcuffed while covering the Shanghai protests,” the spokesman said. 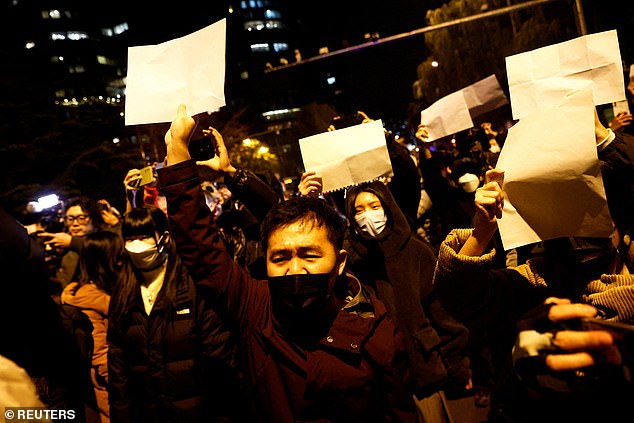 People gather for a vigil holding white sheets of paper in protest against Covid restrictions, as they remember the victims of a fire in Urumqi, as Covid outbreaks continue in Beijing

During his arrest he was beaten and kicked by the police. This happened while he was working as an accredited journalist.

“It is deeply concerning that one of our journalists has been attacked in this manner while performing his duties. We have not received any official statement or apology from the Chinese authorities, other than a claim by the officials who later released him that they had arrested him for his own good in case he caught Covid from the mob. We do not find this a credible explanation.’

Morgan Freeman criticized for participating in the opening ceremony of the 2022 World Cup in Qatar: ‘Should be ashamed’