lIt was months in the planning and it was going to be the best trip of my life: a tour of South Africa, the country I’d most like to visit, with not just a local, but someone I – in my twisted mind – almost certainly got married. I was approaching my thirties, having spent most of my twenties as a journalist traveling the world alone instead of settling down like my peers. I knew I wanted kids like her, but then I had to collect more passport stamps.

I came home from my travels, unsurprisingly, with a very average job, a shaky financial situation and no discernible dating prospects. Then Jacob* came along through some mutual friends: a charming, funny, ridiculously handsome South African who divided his time between there and London and who (for reasons that would become clear later) was miraculously still single.

Which brings us to the runway at Heathrow Airport in October 2015. I was on my way to Cape Town, where Jacob had enthusiastically insisted that I join him on a carefully mapped road trip along the Garden Route, a 300-kilometer stretch of the southeast coast where vineyards, wildlife and seascapes await. I couldn’t have been luckier, I thought.

Unfortunately, not long after landing in Cape Town, the dream that felt too good to be true became a reality. Jacob picked me up from the airport in a Ferrari. This was my first clue to how astronomically rich he was; my second was when we stopped at his James Bond villainous lair of a house, about the size of a multi-story parking garage. This was not a good thing. No sooner had my bags touched the marble floor than he said almost casually, “There’s something at work – I’m afraid the road trip is off.” Canceling vacations on the eve of departure without hesitation is, of course, something you can only do if you’re very wealthy.

Later, Jacob reluctantly drove us north to the Cape Winelands for a weekend while I devised a backup plan. It was beautiful – we were stationed in a lavish suite at La Residence, an estate in the Franschhoek Valley where plump peacocks paraded across the green lawns – and it was horrendous. Jacob informed every waiter who asked what they could bring “his wife” that I was definitely not his wife.

Instead of flying straight back to the UK in defeat, I arranged volunteer work with two conservation organizations along the Garden Route. I left on the bus Monday morning when Jacob unceremoniously disappeared into the ether. 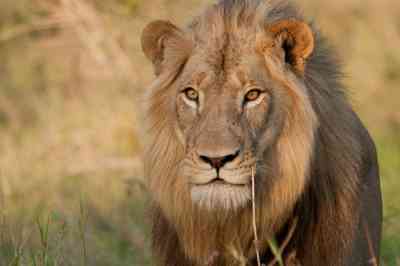 A lion in the Kruger

I think if I had been in another country it would have been impossible to enjoy the next few weeks. It wasn’t just the sting of ghosting, being more than 8,000 miles from home, or the operational nuances of being stuck abroad with no cash. It was all those hours I would have to think about ending up alone and childless, despite not wanting to.

As useless as my host turned out to be, South Africa had other things up its sleeve. I spent the next week at Monkeyland in Plettenberg Bay, the world’s first free-roaming primate sanctuary – a forest home to more than 500 species of monkeys rescued from zoos, circuses and laboratories. There, under the wing of Paula, a middle-aged volunteer who had fled England for her own reasons, we watched from behind the trees as animals that had once performed tricks on humans were taught to retreat and start a new life. to forge the jungle. It was hard to feel hopeless in the presence of such a release.

From there I moved to Gansbaai, two hours south of Cape Town, famous for its shark cage diving. I spent several days with the scientists at Marine Dynamics studying whales and great whites as our boat rolled with the swell. It was hard to feel lethargic with so much adrenaline on board. 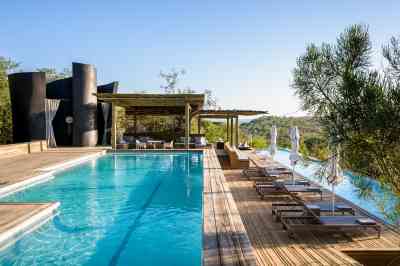 By this stage I had fallen hopelessly in love with the country and was determined to make my way east to a safari lodge in the Kruger National Park that I had heard countless South Africans rave about. Sure, Singita Lebombo—a sleek, 13-suite retreat built over a hippo-dotted river, on an enviable 33,000-acre secluded concession bordering Mozambique—became my favorite hotel in the world. If I had one more day on Earth before an asteroid hit, I’d head there to be among the slumbering lions, prowling leopards, herds of elephants, and graceful giraffes.

I was lucky enough to have Brian as my guide: an expert survivalist, formerly for the South African Special Forces, who has a black belt in taekwondo and now has a passion for butterflies and rare plants. And Kristin, a feisty American TV producer who traveled alone and, as our conversations showed, was also convinced she’d left it too late to start a family, shared our twice-a-day drives through the bush .

Toward the end of what could easily have been the loneliest journey of my life, it was hard to feel lost in a country that had completed me so unexpectedly. Jacob didn’t put me off South Africa – in fact he did quite the opposite. Seeing the flag or hearing the accent now evokes a Pavlovian response in me – I feel a deep longing to return. 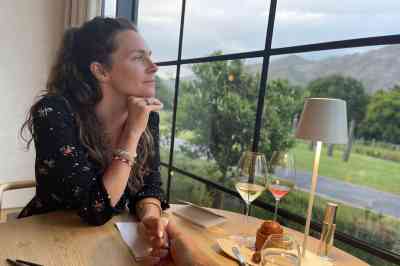 Annabel returned to Cape Town with her fiancé

My most recent visit, at the age of 35, was in October last year and it felt like it had come full circle. For the first time, I wasn’t traveling alone, but with my fiancé, Julius, a German pilot I’d met against all odds during the pandemic. Nearly six years to the day after I took my first ride with Brian, we had an emotional reunion (certainly on my part), and I was back in the same chair: trudging around Singita Lebombo and pointing at lions of the same pride I’ I had met before while Brian waxed lyrical about butterflies. Only this time I was also with Julius.

I also returned to the Cape Winelands, where we plotted our future during a two-night picnic poolside picnic at Mont Rochelle, Richard Branson’s whimsically designed wine estate that has arguably the finest views in Franschhoek of the mountains and valleys.

We ended up at Ellerman House in Cape Town, an elegant mansion filled with art. It’s a short drive from Jacob’s hideout, where I was plunged into such sudden misery all those years ago.

This time something even more unexpected happened: Julius and I became pregnant with our son, Jasper. If we ever manage to save enough money – or if that asteroid looks about to hit – Julius and I will head straight back to Singita to present it, Simba-style, to Brian and the glorious South African bush.

*name has been changed

Annabel Fenwick Elliott has hosted Virgin Atlantic, which has return flights to Johannesburg from £664pp (virginatlantic.com), and Singita Lebombo. Four nights full board from £5,790pp, including transfers (mavrossafaris.com) 1. Spot big cats in Sabi Sands
For an incredible safari experience, you can’t beat Sabi Sands, one of the oldest private reserves in South Africa. It borders the famous Kruger National Park, but has a more exclusive feel thanks to the selection of ultra-luxurious lodges, including Londolozi, Ulusaba, Singita and &Beyond Kirkman’s Kamp. This region is home to many of the Big Five, but in particular it is one of the best places in all of Africa to spot the elusive leopard.
Details Seven nights full board from £11,950pp, including flights and transfers (scottdunn.com)

2. Explore cosmopolitan Cape Town
It’s easily one of the best cities in the world, with a beautiful coast, excellent mountain walks, a great arts scene, lively bars and breathtaking cuisine – all for a fraction of what you’d pay in Europe. Don’t leave Cape Town without visiting Dylan Lewis’ Sculpture Garden (£10 pp; dylanlewis.com), Boulders Beach to see the native penguin colony and Hout Bay to swim with wild seals.
Details Seven nights half board from £741pp, including flights (loveholidays.com) 3. Drive the Garden Route
Few road trips compare to South Africa’s Garden Route, a 300-kilometer stretch of the southeastern coast between Mossel Bay and Storms River that encompasses everything from rugged beaches and dramatic mountain ranges to dense forests and shimmering lagoons, with plenty of charming little towns to stop off en route. Fancy an encounter with sharks? Be sure to visit Gansbaai, the great white capital of the world and a good place to try cage diving.
Details Twelve night accommodation only from £2,520pp, including flights and transfers (rainbowtours.co.uk)

4. Meet meerkats in the Kalahari
Tswalu Kalahari in the North Cape, lesser known than the safari regions to the east, is actually one of South Africa’s largest private game parks, a breathtaking stretch of savannah with the same animals plus the spectacular ocher dunes where Namibia, just to the west, stands famous for. With a family of habituated meerkats, left, it’s also the closest thing in the world to these fascinating creatures outside of a zoo.
Details Four nights full board in Tswalu Kalahari from £7,995pp, including flights and transfers (abercrombiekent.co.uk) 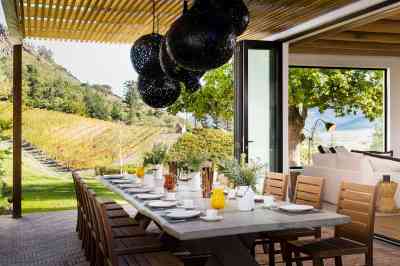 5. Raise a glass in the Winelands
South Africa’s entire Cape wine region is a feast for the senses, but Franschhoek (meaning “French corner”) is arguably its prettiest district, and Sir Richard Branson’s Mont Rochelle is an exquisite country estate. Dating back to 1668 but peppered with modern embellishments, it offers several divine restaurants, a tasting room, and guided tours of the region on foot or horseback. Don’t miss the quaint boutiques and art galleries along Franschhoek’s only major street.
Details Three nights half board from £1,098pp ​​(virginlimitededition.com). Fly to Cape Town

Holiday travel made easier – The perfect shoe for flying past TSA