A victim of this week’s terror bombing in Jerusalem succumbed to his injuries on Saturday, bringing the death toll from the attack to two.

Tadese Tashume Ben Ma’ada was seriously injured in an explosion at a bus stop at Jerusalem’s main entrance on Wednesday morning, one of two bombings that rocked the capital.

A statement from Shaare Zedek Medical Center in Jerusalem said trauma and ICU teams “fought for his life, but unfortunately his injuries were too severe.”

“We offer our deepest condolences to the family,” the hospital added.

Ben Ma’ada’s family said they were grateful for the support they have received since the attack, but asked the public and media to respect their privacy.

Ben Ma’ada, 50, immigrated to Israel from Ethiopia 21 years ago. He leaves behind a wife and six children.

The Israeli flag hangs where a bomb exploded earlier today at the entrance to Jerusalem, on November 23, 2022. (Yonatan Sindel/Flash90)

In response to reports of Ben Ma’ada’s death, Prime Minister-designate Benjamin Netanyahu sent his condolences to the family and praised the medical teams who had treated him.

“Last week I visited his devoted family, who lovingly enveloped him, and the doctors who fought valiantly for his life. I hug the family at this difficult hour. May he rest in peace,” Netanyahu said on Twitter.

Outgoing Prime Minister Yair Lapid said he was “heartbroken” when he learned of Ben Ma’ada’s death.

The double attack in Jerusalem initially killed one and injured 22 others. The first victim was named as 16-year-old Aryeh Schupak, a yeshiva student from the Har Nof neighborhood of Jerusalem, who holds dual Israeli-Canadian citizenship. 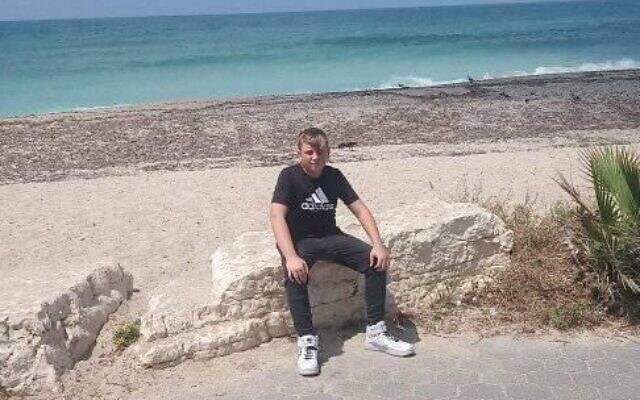 16-year-old Aryeh Schupak, killed in a bombing at the entrance to Jerusalem, November 23, 2022. (Courtesy)

Police believe the explosions at two bus stops were caused by nearly identical remote-detonated explosives hidden in bushes behind the bus stops. The devices were packed with nails to inflict as many victims as possible, police officials said.

The first explosion at the bus stop at the city entrance claimed most of the victims. The second, at Ramot Junction, hurt five slightly.

The explosions came amid heightened tensions following a series of Palestinian attacks that have killed 29 people in Israel and the West Bank since the beginning of the year.

Emanuel Fabian contributed to this report.

I joined The Times of Israel after many years of covering American and Israeli politics for Hebrew news outlets.

I believe responsible coverage of Israeli politicians means presenting a 360-degree view of their words and actions – not just what is happening, but what that means in the wider context of Israeli society and the region.

That’s a hard thing to do, because you can rarely fool politicians – you have to go a step further to present the full context and try to overcome your own prejudices.

I am proud of our work that tells the story of Israeli politics directly and completely. I believe that Israel is stronger and more democratic if professional journalists do the hard work well.

Your support for our work by becoming a member The Times of Israel community helps ensure that we can continue to do this.

You are a devoted reader

We are very glad that you read X Times of Israel Articles in the past month.

That’s why we started the Times of Israel ten years ago – to provide discerning readers like you with must-read coverage of Israel and the Jewish world.

So now we have a request. Unlike other news outlets, we do not have a paywall. But since the journalism we do is precious, we invite readers for whom The Times of Israel has become important to help support our work by joining The Times of Israel community.

For just $6 a month, you can help support our quality journalism while enjoying The Times of Israel ADVERTISING FREEas well as access exclusive content only available to members of the Times of Israel Community.

Thank you,
David Horovitz, founder and editor of The Times of Israel

Hearing loss: 1 billion people are at risk from unsafe listening

A mother who drank a few glasses of wine during her pregnancy had a son with developmental problems. She said the buzz wasn’t worth it.