An Hermès Birkin bag has just sold in store for £29,840. There’s a bottle of Château Mouton Rothschild on the menu for £8,694 and Moët & Chandon champagne on tap. A seven-course tasting menu, designed by a chef from a Michelin-starred restaurant, costs £250. Still, this isn’t a fancy Middle Eastern hotel. It’s the world’s newest cruise ship – sorry – superyacht: the Evrima of the Ritz-Carlton Yacht Collection.

The 298-passenger yacht, which founder and CEO Douglas Prothero swears isn’t a cruise ship (way too common), launched in October, 30 months behind schedule, after eight delays. Financial problems at the Spanish shipyard, Covid and supply chain issues have led to hundreds of passengers canceling their cruises. It is the first in a trio of the hotel brand’s ships – and part of a larger trend of high-end hotels branching out to the sea.

Evrima will explore the most exclusive parts of the Caribbean

Evrima has just crossed the Atlantic from Lisbon, where it was christened on November 5, to Barbados for a winter season exploring the most exclusive corners of the Caribbean, from Iles des Saintes to Jost Van Dyke and Saint-Barthélemy.

The switch to luxury ships makes perfect sense for the hotel group. Ritz-Carlton not only has its own extensive database of high net worth customers, but also that of all the other luxury brands of the Marriott portfolio, from St Regis to W and Edition.

It means 90 percent of bookings to date come from customers who have never taken a cruise before — a figure other luxury lines can only dream of — and Evrima would go full steam ahead if supply issues don’t stop the completion of the largest suites. had delayed.

The ship is beautifully decorated in glossy marble and natural tones, with splashes of blue, yellow and silver. There is abstract art and round sculptures everywhere, much of which is for sale, and the entire collection is managed by an ‘art concierge’. Cabins, all called suites, are larger than standard cruise ship rooms, with high ceilings and deep balconies called terraces.

● How to sail a superyacht for a fraction of the cost
● Castaway or the new wave – which cruise tribe are you?

There’s no buffet—heaven forbid—but instead five restaurants, one of which, SEA, is the first ocean venture for Sven Elverfeld, executive chef of the three-Michelin-star restaurant at the Ritz-Carlton in Wolfsburg, Germany. It’s here that passengers line up to sample the £250 tasting menu with wine pairings.

In a world where cruise ships are being built bigger and blingier, superyachts like Evrima are finding a new niche among passengers who can’t afford – or don’t feel like – chartering but want a small ship experience with all the cachet of the drop anchor between the gin palaces at Hvar or Saint-Tropez. 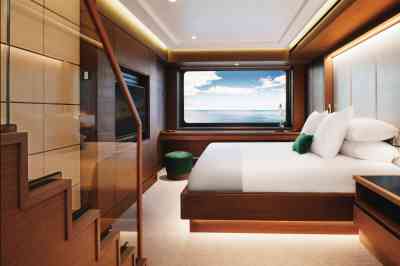 One of the suites on board Evrima

Ritz-Carlton is the first hotel group to make its mark on a superyacht, but rivals are already hot on its heels. Four Seasons has announced its own move into the small ship market with three yachts worth £1 billion. The first 190-passenger ship, whose lines are inspired by Aristotle Onassis’s classic Christina O, will set sail in 2025 and looks even more splashy than Evrima, with the top suite of four decks and a swimming pool with a floor that can be raised to create a dance floor or open-air cinema. “When we launch in 2025, there will be nothing like it on the open seas,” said CEO Larry Pimentel, a cruise industry veteran. Echoing Prothero, Pimentel emphasizes that Four Seasons Yachts is not a cruise line, but an “unprecedented luxury lifestyle project”.

There is more. The ultra-luxury hotel group Aman, with Saudi funding, will also take to the water in 2025 with the launch of “Project Sama” (Sanskrit for “rest”), a 180-meter mega-yacht with 50 suites, an Aman Spa complete with Japanese garden, two helipads and a Beach Club that will provide direct access to the water at the stern of the yacht. And German hotel group Seaside Collection, which includes Finolhu in the Maldives’ Baa Atoll, has just acquired the luxury riverboat Crystal Mozart, arguably the fanciest vessel on the Danube. 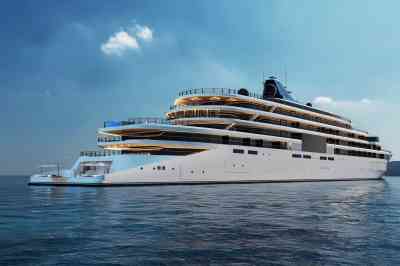 Mozart has a spacious spa and four restaurants, one of which charges £260 for a tasting menu with wine pairings. “River cruise ships are much closer to the topic of luxury than ocean liners,” says owner Gregor Gerlach, who, like Four Seasons, Ritz-Carlton and Aman, plans to tap into his own expensive database rather than passengers from other cruise lines.

So who is likely to sail on this new fleet of superyachts? Evrima’s remarkably wealthy crowd at the Lisbon christening ceremony seemed younger than conventional passengers on a luxury ship, including some glamorous couples in their 30s and extremely well-dressed families with cherubic toddlers in matching outfits (the yacht even has a kids’ club). Laid-back Aman lures one per downtown and celebrities—Bill Gates, Leonardo DiCaprio, and the Clooneys are all former guests—while Will Smith and Cindy Crawford are both known for the swanky Four Seasons ashore resorts. 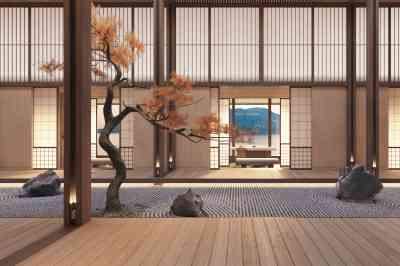 Project Sama has an Aman Spa complete with Japanese garden

Presumably any of these A-listers would charter if they wanted a vacation at sea, or in Gates’ case, just sail on their own yacht. What we do know, from the bar Evrima has set, is that prospective guests will happily pay a minimum of £875 per person per night, book their stay with a few days at a Ritz-Carlton, or presumably an Aman resort or a Four Seasons, and not bat an eyelid at a £250 dinner menu. As Prothero says, these are not cruise regulars. Rather, they are the types who rent a chic villa in Tuscany or take the whole family on a luxury safari. So whatever you do, don’t call it a cruise ship.

Travel news: holiday inspiration for 2023 and the world’s most expensive restaurant pop-up

Sun Country will add dozens of nonstops to MSP this spring, including JFK, KC, and St. Louis